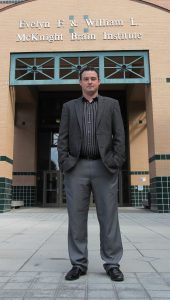 “By 2050, the U.S. population over the age of 65 will double. We’re simply not set up as a society to treat an exponential growth of dementia patients. Economically, our healthcare system is unable to absorb that impact.”

Woods is the principal investigator of the ACT Grant, a multi-site clinical trial that pairs non-invasive electrical brain stimulation with cognitive training. The goal is to see if this type of therapy can slow or prevent dementia. The NIH’s National Institute on Aging reports that total health care spending in the last five years of life for someone with dementia is $250 million, 57 percent more than the costs associated with death from cancer and heart disease.

“Half the expenses of long-term care for dementia patients comes from the family, and the other half is paid by taxpayers,” states Woods. “If we can delay the onset of dementia by just one year, it would save the U.S. hundreds of millions of dollars annually.”

Woods relies on UF Research Computing for HiPerGator and consulting expertise. He purchased 100 cores to process brain scans and analyze data. Also, bioinformatics specialist Alex Moskalenko spent many hours reworking the code of FSL, one of the numerous software applications needed for this trial, to make it work. Processing all sites’ participant scans on HiPerGator makes sense, says Woods.

“In the ‘old’ days (five years ago) we processed the data ourselves. The costs of tying up staff to handle data processing and of dedicating a computer for months on end was staggering. With HiPerGator, we can have multiple scans produced simultaneously. Plus, doing all of the study sites’ scans and data processing in one place means we have an efficient way to produce findings at each stage of our research.”