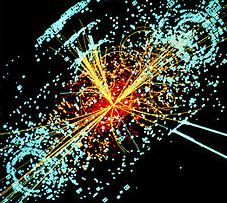 For the scientific community, the discovery of the potential missing particle in the theory of matter is as big as it gets. UF Research Computing is providing ongoing support for that discovery – known as the Higgs Particle – with its High Performance Computing cluster.

The Open Science Grid Consortium facilitates distributed computing for scientific research. This Consortium is composed of researchers from universities, national laboratories, and computing centers across the U.S. Higgs Particle computing work logged by the Consortium is measured in central processing unit (CPU) hours. In October the largest CPU contributors to these research efforts were:

One research group supported by the High Performance Computing Center is the compact muon solenoid (CMS) experiment, part of the European Organization for Nuclear Research. In 2010 the CMS experiment, after more than a decade of preparation, started to record collision events. The discovery of the Higgs Particle was announced on July 4, 2012. Analysis and validation of observations requires extensive computation on large data sets. The compute capacity provided at UF contributed significantly to the data processing for that discovery.

High-definition videos of the Higgs Particle discovered this past July are online. Email the Research Computing staff for more information about the work underway, or visit their Web site for a list of services, recent news, and training offerings.