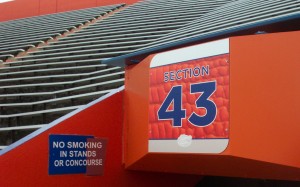 The new distributed antenna system (DAS) network increases the call volume capacity, cell phone coverage, and wireless performance for fans cheering on the Gators. It took almost three years to coordinate and implement the project, because installation involved extremely complex technologies that rely on radio frequency and hundreds of small receiving antennas. Keeping the antenna installation aesthetically pleasing was a primary goal for the University Athletic Association, UFIT, and AT&T. For example, the antennas serving the bowl (seating area) are hidden behind enclosures used for the section number signage.

“During the first game this season, I placed a test call to home and walked around the whole stadium concourse and the call did not drop,” said John Madey, UFIT’s Director of Telecommunications. “I would not have been able to even make a phone call last year.”

Madey said cell connections will continue to improve throughout the 2012 football season, as the system becomes fully optimized. The process will take several game-day events to fully fine-tune the DAS network.

When Vice President and CIO Elias Eldayrie joined UF in 2010, enhancing cell phone service campus-wide was among the IT projects at the top of his priority list.

“Our goal is to have a minimum of three bars of cellphone service anywhere on campus,” remarked Eldayrie.

UFIT’s Telecommunications team is now focused on the next DAS installation, which is AHC-Shands. The design includes approximately 10 buildings at AHC-Shands, with completion expected in Spring 2013. The O’Connell Center, Reitz Union, and Smathers Libraries are also slated for DAS installations in 2013.