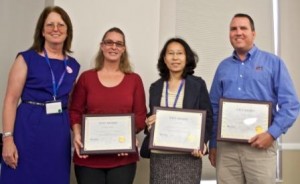 UFIT’s Awards and Recognition Program recognizes those who contribute to the university’s IT goals and core values. The program, open to all eligible members of the university community, celebrates teams who bring out the best in each other, serve customers with distinction, and work tirelessly behind the scenes to keep university systems running.

All awards are team awards. A team is defined as staff who worked on an IT project (project team may have both IT and non-IT staff), resolved a technical issue or improved a business process, or a group, unit, or department that exemplifies the characteristics highlighted in one of three awards categories:

• Bringing out the Best: Collaboration, Innovation and Leadership Throughout UFIT
• Serving the Client: Providing Consistent and Exceptional Service
• Unsung Heroes: Working Behind the Scenes

Last year’s winners included staff from Finance & Accounting and the Academic Health Center. The selection committee will evaluate nominations based on work performed during the eligibility period of July 1, 2012 ‐ June 30, 2013. Visit the program Website for complete information on critical dates, award categories, eligibility, and scoring criteria.

All nominations must be received by Tuesday, October 1, 2013.

Winners will be recognized at the Fall IT Assembly on Tuesday, October 8, at Emerson Alumni Hall. Please contact Anne Allen if you have any questions about program eligibility or the nomination process.