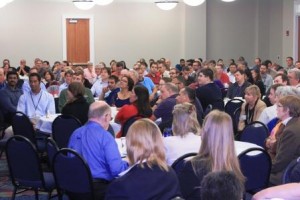 Vice President and CIO Elias Eldayrie presented the 2012 UFIT Awards today at the Fall IT Assembly. Over 200 people from UF&Shands, IFAS, and main campus gathered at Emerson Alumni Hall for this event.

The Fall IT Assembly opened with Dr. Bernie Machen awarding the President’s Medallion to Elizabeth “Miss Betty” Jones. Miss Betty is the longest serving employee in UF history, with 60 years of service–the last 38 years (and counting) in UFIT. The President’s Medallion is given for outstanding contributions to the university. Individuals receiving the award in past years include the Teacher/Scholar of the Year, Distinguished Service Professors, and Administrative Council members.

Eldayrie’s presentation was on the FY 2013 budget and some of UFIT’s current projects. He also gave an overview of the IT position reclassification process in progress, as well as results from the inaugural UFIT Customer Survey. Questions about the presentation or the UFIT Awards may be emailed to the UFIT Communications office.